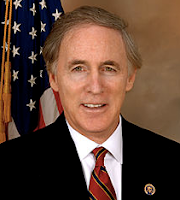 Cliff Stearns, former Republican Congressman from Florida, Executive Director of APCO Worldwide's DC office, President of the Association of Former Members of Congress,  former primary liaison between the House of Representatives and the European Parliament, and the former owner of a small chain of restaurants and motels in Florida, speaks about his two and a half decades of experience in Congress in which he advocated for tax-payers as he sought to limit the size of the federal government.